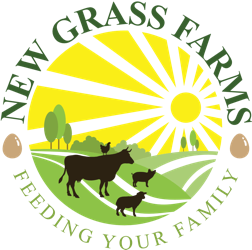 Gracefully soaring high in the sky, nothing escapes the eagles eye; not even a helpless little lamb.

A couple of weeks ago, a lamb was born out of season. I wasn't expecting any lambs until April, and one day there's a little lamb running around out there! I have the sheep running together with my two year old steers and heifers and that's been working well until this little lamb's unexpected arrival. Apparently one of the steers stepped on the front leg of the lamb and broke it. We put a splint on it and patched it up best we could.

I was amazed at the courage and determination of that little lamb. He valiantly hopped along on three legs everywhere the sheep flock went. I had little faith that it would survive due to all the odds stacked against it: broken leg, cold, wet muddy conditions. It hung in there for several weeks and was doing fine, until....

I noticed one day that it was nowhere to be seen. I presumed it must have met its sad end being devoured by a coyote or something. A day or two later our daughter Ava casually mentioned having seen an bald eagle out in the field where the cows and sheep were. Instantly I knew the sad fate of that courageous little lamb: he'd fallen prey to the sharp talons and beak of the great American Bald Eagle.

We've seen a real increase in the eagle population around here in the last number of years. Possibly due to the catfish production in this area or it could be other reasons but we have quite a few eagles around here. We had a pair of eagles nesting on the back property of my grandmothers farm.

I guess that's all part of nature and life, although it saddened me to think of all that little lamb went through and then to meet his end in such a way...